After considering multiple options for our annual vacation this year, we finally narrowed down and decided on Paris. Cos you know, “Paris, is always a good idea!”

The fact that there is a direct flight to Paris from Bangalore, also might have been a key deciding factor. 😉

While, I had been multiple times to Paris before. Being a fashion designer working with European brands, a few years back, I was frequenting Paris almost 2-3 times in a year. Which also pushed me to learn the language, which now of course is a little rusty!

But, this was going to be a first, travelling as a family. And travelling with two kids. I was going to see Paris differently this time. And I was looking forward to it immensely 😊

And so, the planner that I am, I started doing my research and making my travel journal ready.

While, we don’t always stick to an agenda rigidly. I always find having a rough plan and itinerary helps to be able to make the best use of time. While, keeping room for flexibility. With kids, that’s key!

The first was booking our tickets, which was easy, considering there was only one direct flight from Bangalore. We traveled Jet in code share with Air France.

Next was finding the right hotel. We wanted to be in the city center, but also have a decent sized room considering we’d be 4 in a room.

After doing a fair amount of research and looking at hotels, air bnb’s as well as service apartments, we finally narrowed in on Hotel Adele & Jules. And it was perfect. It ticked off all our boxes of our must haves and then some more. Great location, spacious rooms, very tastefully done. Courteous staff and all amenities we could have wished for. They arranged for a crib in the room, plus the sofa became an almost queen sized bed. And even after that we had enough space in the room. Would highly recommend this hotel, especially when travelling with kids 😊 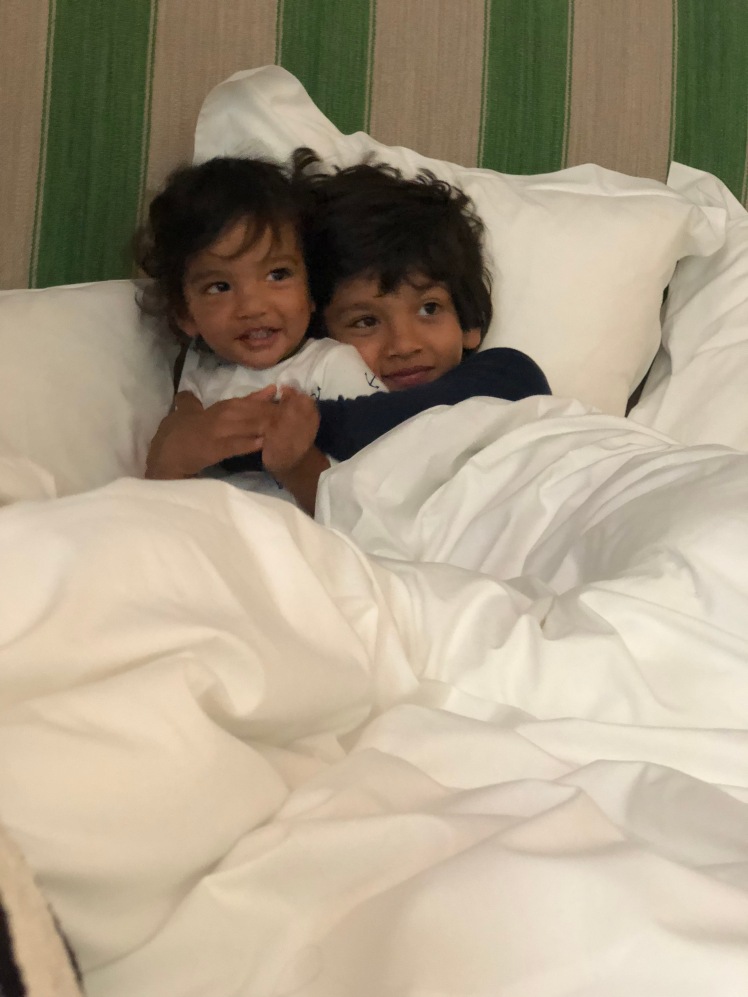 We planned the Eiffel Tower on the first day we reached! Start with the best the city has to offer 😊 We pre-booked all tickets before-hand online. Would recommend doing that wherever it is possible. That’s one queue less to stand in, which can be really long! So be prepared. You have the choice of either going only up till level 2 or go right up to level 3. We went to level 3, while the queues and all the waiting got a little overwhelming, especially cos of the heat, it was worth it in the end! We carried the stroller for Ranbir right till the top. It’s convenient and permitted. Make sure you carry enough water and even some dry snacks for the kids. With all the waiting, they are bound to get hungry and bored. Snacks help keep them busy and you sane. We chose to go up to the tower while it was still day-light, as you get better views of the city, which are spectacular!

Ticked off the champagne and kisses on the Eiffel Tower off my list this time. And even managed to get a family picture with all three boys in it! If you aren’t really a selfie stick kind of person, like me…don’t worry. Just ask! People are mostly very helpful about it. Will most likely ask you to return the favour for them. 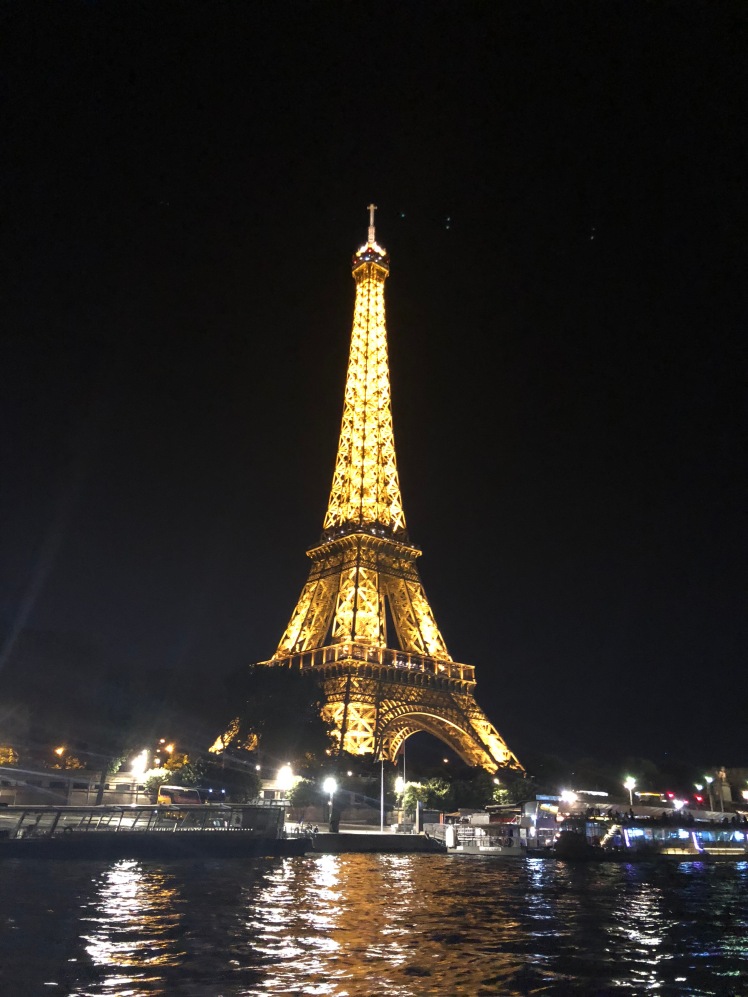 Post the climb up the Eiffel Tower, we had a cruise on the Siene  planned. Again, we’d pre-booked tickets and again it involved some queueing up. But the views of Paris all lit up in its night time glory, more than made up. Kabir’s look of wonder and amazement on seeing the tower lit and twinkling was EVERYTHING! Moments like those ….make the crazy hours of flights….and jetlag …all worth it!

The only thing we later thought was maybe we packed in a bit too much for the first day. On hindsight we’d keep the plan for Day 1 on Day 2.

We had Sacre Coeur and Montmarte planned for the next day. And after a busy evening the day before, it was a nice relaxed day! Kabir loved the interiors of the church and we spent sometime just sitting and soaking in the aura. Ranbir was more interested in blowing the candles.:D Post the church, we headed to the cobbled streets of Monmarte. One of my favorite areas to spend a lazy afternoon in Paris. Soaking in the art, the beautiful buildings with vines growing all over the walls. Pretty lanes and quaint cafes! Sat down to eat in one of them and had a lovely meal. Kabir was excited enough to try the escargots as well! That’s French for snails …I’ve always loved them, and both the boys took to the taste as well. Daddy was happier staying away! 😀 I love introducing new foods to the boys. And have done so from quite early on. I think it helps them, to have build a wider taste palette and be more open to experiment. 😊 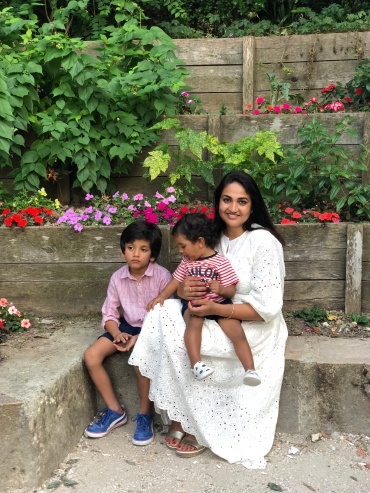 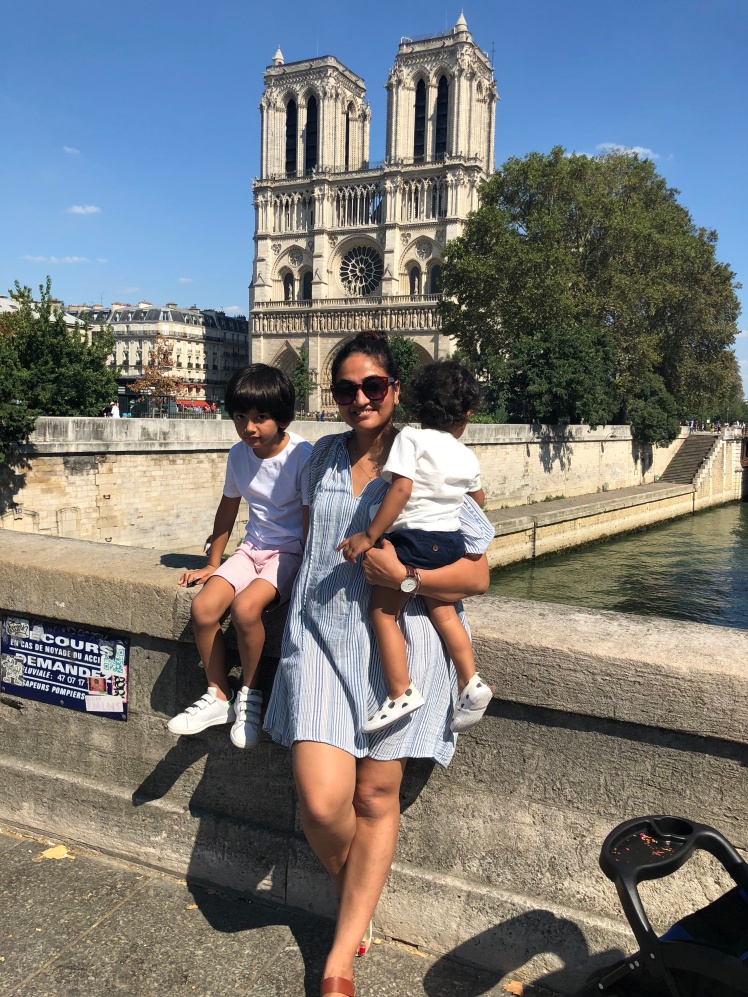 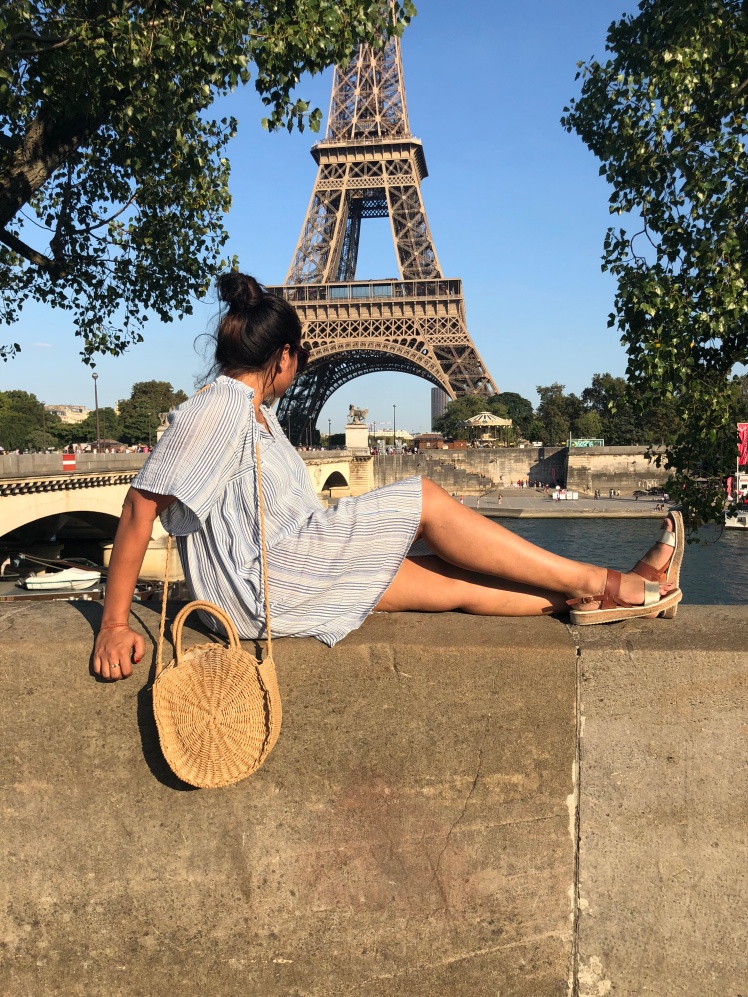 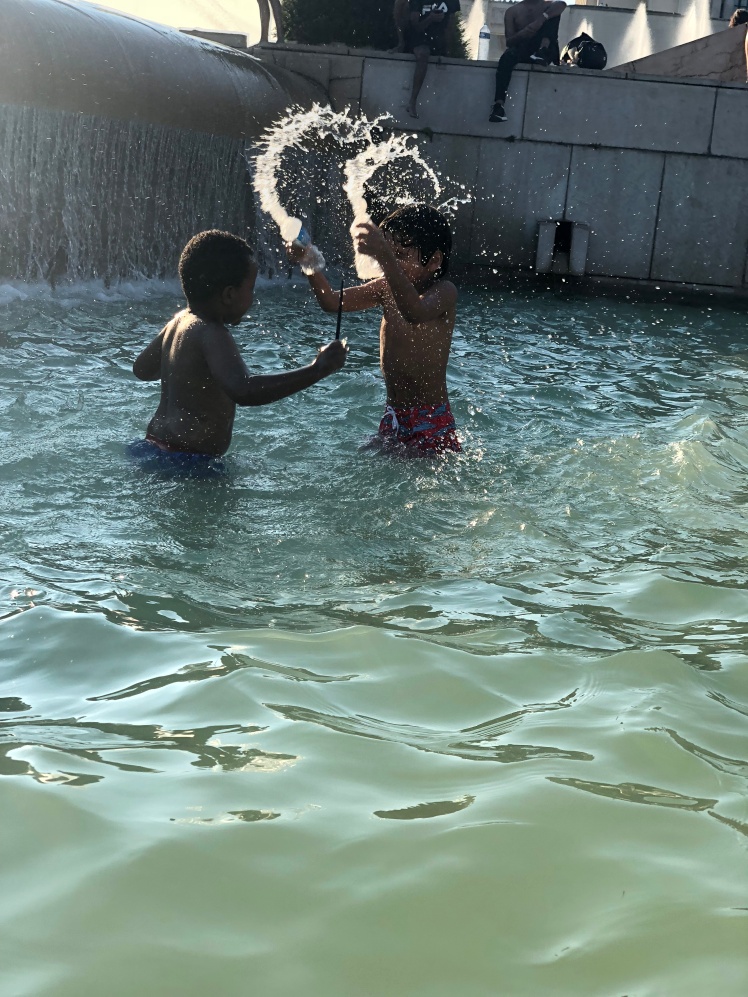 After marveling the at the architecture of Notre Dame and Kabir loving the gargoyles, we relaxed a bit in the parks behind the church and then headed to Jardin du Luxembourg, for some more park time. But as the day progressed we improvised a little and instead of Musee D’orsay, headed back to the Eiffel Tower. Ever since Kabir saw kids splashing the fountains near the Eiffel Tower, on our first day, he wanted to do the same. So after hearing him talk about it for the nth time, we finally headed there and let him have his fill. And we were prepared this time with his trunks and a towel. Despite the sun being so strong and the heat in general, the fountain water was freezing!! But that didn’t stop him from splashing to his hearts content and making friends to play water games as well. And it was all worth it 😊

We took the metro around for most part of our travel within the city. With an occasional uber as well. Taking the metro can be quite a work-out with the pram and 2 kids in tow. So be prepared! Most of the metros, don’t have escalators and taking the stairs is invariable. So having a super light stroller is a must if you plan on using the Metro. And be ready to work those arms and legs! The uber is very convenient and easy to use as well. Also, Kabir’s first option, considering how much he ended up walking! While the little one had the constant luxury of the pram, Kabir ended up walking a lot! And for a 6 year old so used to city life in India, he did quite well. There were days we walked almost 20k steps!

The day after we decided to try and spend indoors, to give ourselves a respite from the heat. So we chose to head to the Centre Pompidou. A Modern Art gallery in a 20th century architectural marvel. With an interactive design exhibit for kids being a highlight, we spent hours inside exploring the art and sculpture with the kids. Ending the evening with a walk around sunset at the Louvre. With its water fountains and glass façade, a beautiful evening indeed.

Next was a day trip to Monet’s gardens in Giverny. The gorgeous lotus pond and all the surrounding foliage which inspired all his famous paintings. We took a train both to and from from Giverny. From the train station you have to take another bus to take you to Monet’s house. A few hours are good to take you through the house and gardens. There are options to eat around as well. 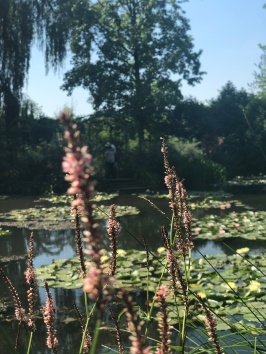 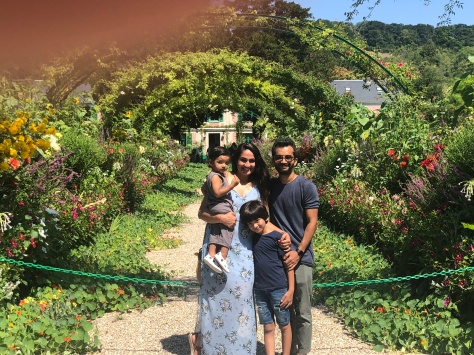 The next 2 days we spent in a beach town in Normany, called Etretat. Having been to Paris multiple times before, this was my highlight and I was not disappointed! It was a quaint little town with a gorgeous pebbled beach, lovely eateries and amazing ice-cream! And ofcourse the famous falaises d’Etretat, the ocean side chalk cliffs with natural arches. It was a very different experience than being in Paris city and I’m glad we planned it such. The hotel was just a short walk away from the cliffs and the beach. Another highlight in the city is the Jardin D’Etretat. Beautifully manicured gardens in the heart of the city with land art sculptures and dramatic views of the sea. 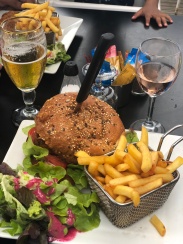 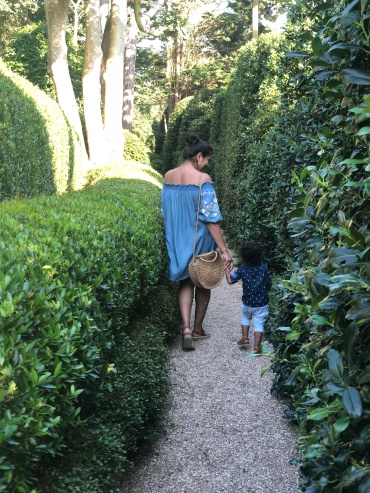 One entire day after we got back, was spent at Disneyland Paris. And that is material enough for another article altogether, so I won’t go into too many details there. Other than it was one of Kabir’s favorite day of the entire trip! 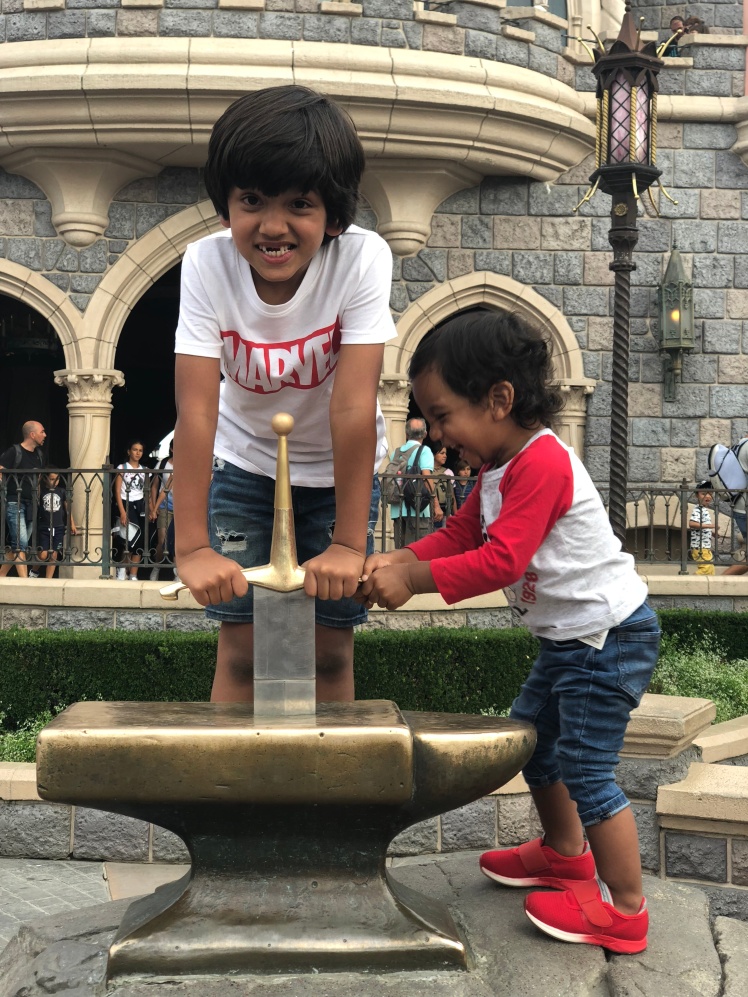 The last day came a close second to being his favorite though. The day spent in Jadins des Plantes. An amazing space which has a zoo and galleries with different exhibitions taking place. We happened to catch the “T-Rex a Paris” exhibition, just in time.  An actual fossil found of the only female T-rex, exhibited along with some super interactive stalls. After the exhibit, we spent time at the menagerie, which has some amazing animals. From flamingos to lamas, different types of owls, a section dedicated to snakes (Kabir’s dream come true!), kangaroo and more. A must visit for kids really 😊 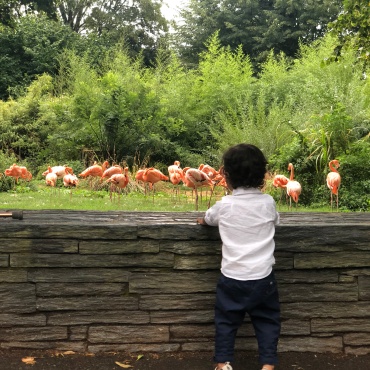 The trip ended with the most beautiful sunset at the Jardin des Tuileries and taking in the views of the Eiffel Tower, one last time at the Place de La Concorde. 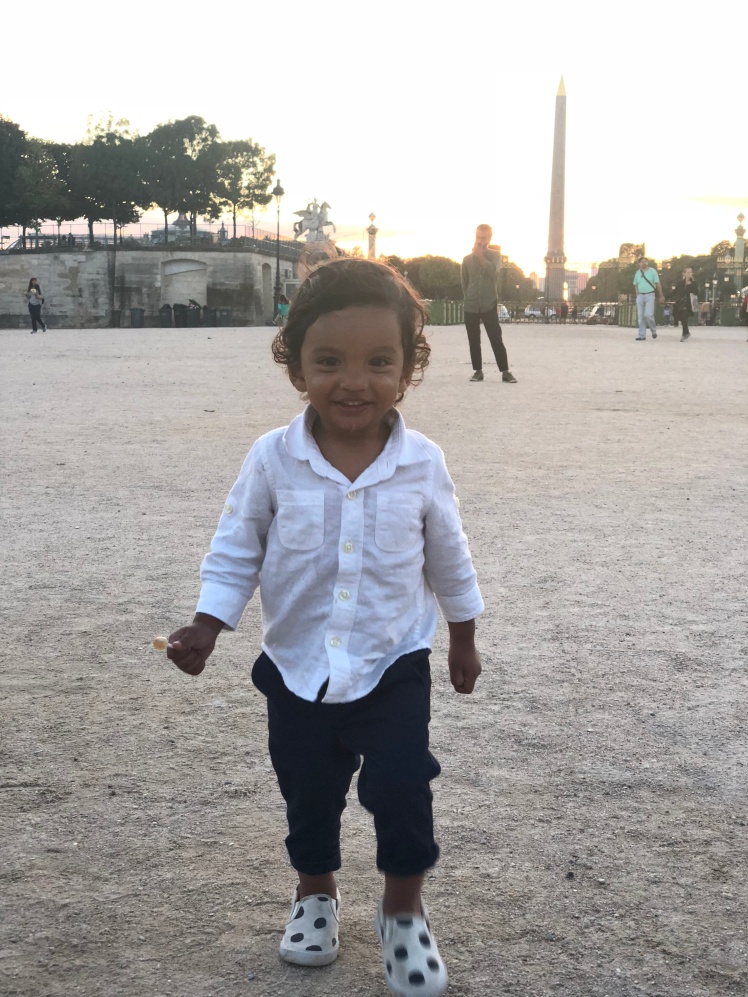 All in all, I would highly recommend Paris if planning a trip to Europe with kids. There’s so much to do and explore. People in general are very helpful. We got offered help multiple times in the metro to hold the pram. Restaurants are very kid friendly as well. And despite the language, getting around is very convenient and ofcourse all major tourist places have English speaking staff and help. That said, learning a few basic words in French is something I would recommend! While I speak a decent amount of French, by the end of the trip, even the boys were charming away people with their “Bonjour” and “Merci” 😊